One of the fishermen in Manokwari who works with me in developing the eco-tourism program is Kosal Welerubun. He lives in Arfai area which has been a tourist destination since early 2010. I have been promoting Arfai as the place for snorkeling for tourists. Here, coral reef extends for 2 kilometers from north to south across the Raimuti islet. On the northern part of Arfai beach, there is a small mangrove forest whose size is getting smaller day by day due to the expansion of human settlement along the shore line. As a fisherman, Mr. Welerubun knows that the mangrove forest and the coral reef are an integrated marine ecosystem. If the mangrove forest is healthy, more fish can be found living among the coral reef. In addition, the existence of the mangrove forest will protect the shore line of Arfai from erosion caused by big waves or even tsunami. So, Mr. Welerubun made a personal initiative to plant seedlings of mangrove trees at the beach near his house. When I saw where he planted the seedlings, I felt that it would be very difficult for the mangrove seedlings to grow because they have to grow on in thick layers of dead hard corals. But Mr. Welerubun knows that beneath the layers of the hard coral is soft soil. So, the planted the seedling between the cracks of the coral layer. Cracks in the coral layers are created when there are big earthquakes. 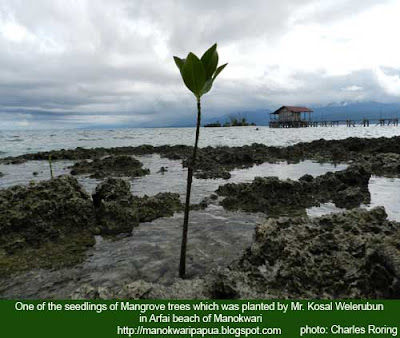 One year after he planted the seedlings, I see that they are now growing. They give us some hope that the reforestation of the coastal area of Arfai with mangrove trees is possible to be done. I hope that these mangrove seedlings will one day become a tropical rainforest that protects the marine ecosystem of the Manokwari. Without the mangrove forest, the number of fish in Dorey bay will decrease. If this happens, fishermen will have to spend more fuel to go out to the sea for catching fish. As a result, the price of fish will be more expensive than now.
Coral reef is the tropical rainforest of the sea. Coral reef absorbs CO2 gases during photosynthesis and releases Oxygen. According to Bert Harris (a biologist from the USA who conducted a snorkeling trip in 2010) the coral reef in Arfai area of Manokwari is home to around two hundred species of fish. This is considered very high for the coral reef that is located near a coastal city.
Both coral reef and rainforest are needed to absorb CO2 gas emissions that have been the major cause of global warming. The effort of Mr. Kosal Welerubun in reforesting the coastal area of Arfai with mangrove trees should be considered as a positive step from the fisherman in fighting global warming. The climate change has caused the melting of glaciers in the Alps. The melting of the ice is a very big problem for ski resorts that operate there. The lack of ice forces them to close their businesses. In tropical region, global warming also causes coral bleaching. The phenomenon could easily be seen during the el-nino, the long dry season. As a result the number of fish in bleached corals decreased significantly. Every body should participate in reducing the CO2 emissions through his or her own ways. The simplest thing that we can do to protect our environment is by treating our plastic, chemical and metal wastes responsibly.
Manokwari city has a population of around 200 thousand people. The Arfai hill is now being filled with big buildings that will become the administration center of the provincial government of West Papua. by Charles Roring
Related article: Mangrove forest of Numfor island
at December 09, 2011