Rainforest Tour in the North Coast of Manokwari

When travelers plan a hiking tour to Manokwari, they always put Arfak mountains in the list of their destination. It is true that the mountain range is rich of wild life. However, I want to introduce another destination in the north coast of this regency which is called Pantura (meaning literally Beach North). North Coast of Manokwari is still covered with low elevation rainforest that is also home to various species of birds, butterflies and nocturnal - marsupial animals such as kuskus and kangaroo (locally called Lao-lao). The wild life in West Papua is different from the one that can be seen in other islands of Indonesian archipelago. Animals and plants in West Papua have more resemblence to the ones that can be found in other Pacific islands and Australia. 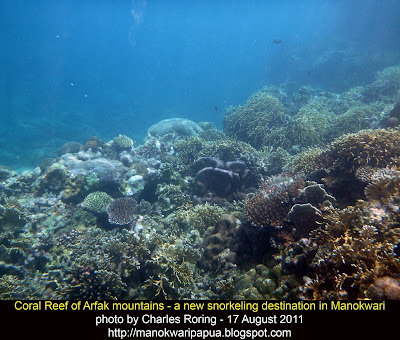 The Pantura area is also a nice place for snorkeling. Coral reef areas in Asai bach and around Kaki island are rich of various species of tropical fish. If you want to enjoy snorkeling in Pantura of Manokwari, bring your own snorkeling mask and fins. You cannot rent them here.
Recommended Underwater Camera
Also don't forget to bring an underwater camera. If you don't have one, I recommend you to buy Panasonic Lumix DMC FT3 or the Nikon Coolpix AW100. Equipped with GPS and compass, these cameras are versatile tool for anybody who wants to capture the beautiful corals that are home to colorful fish and other marine animals. For photo quality, from the official website of Panasonic, the company claims that the Panasonic Lumix DMC FT3 can create 12.1 megapixel images whereas from the official website of Nikon, the digital camera manufacturer claims that its Coolpix AW100 can produce 16 MP photographs.
I personally had tried the Panasonic Lumix DMC FT3 once for snorkeling and after that it was broken! The photograph that I made can be seen above. It's quite clear even though it was taken in low light condition - the weather was cloudy at that time. Unfortunately, it leaked and water entered through its door. Before using it, I had checked its door and locked it. Even though the company claims that it can withstand water pressure up to 12 meters below sea level, my Panasonic DMC FT3 is now broken. So, if I want to buy a digital waterproof camera, I will buy Nikon Coolpix AW 100 for its better pixel quality and, perhaps, its claimed waterproof endurance. 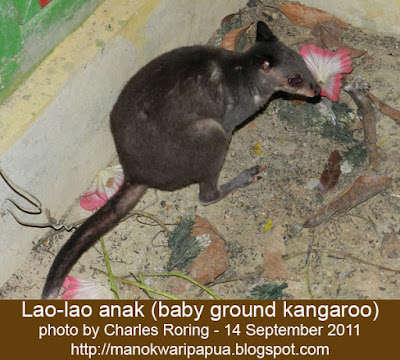 In my last trip to the north coast region, I accompanied three European tourists. we walked up stream the Asai river. We saw sandpiper, pigeon, and hornbills. I shot the sandpiper bird below from a distance of around 60 meters using my super zoom camera - Nikon Coolpix P500. With its 36 x optical zoom capability, I could enlarge the image of the bird in the LCD screen at the back side of the camera before pressing the shutter button. The bird was walking on the bank of the river when I shot it using my digital camera. I suggest that tourists bring telephoto camera, digiscope or binoculars if they want to go hiking in the rainforest of Manokwari. Also, don't forget to buy extra batteries for the electronic devices. 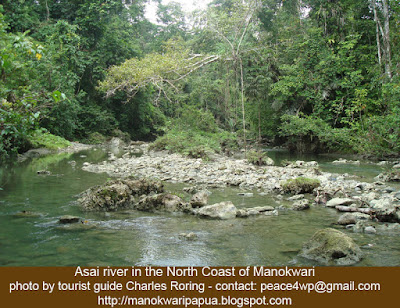 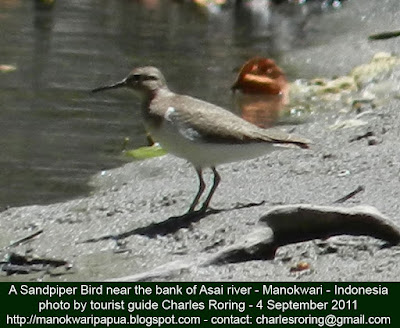 I have visited this river several times but I feel that it is still an interesting destination for anybody who is interested in exploring the rainforest of New Guinea - the largest tropical island in the world. So, if you plan to fly to Manokwari, don't forget to contact me via my email: peace4wp@gmail.com.
Also read: Tropical rainforest of Asai river
at September 17, 2011