On the 30 July 2011, I went cycling to the rainforest behind Inggramui village. After exploring the track inside the jungle, I arrived at a bridge near Zona Papua housing area. There I met someone named Elia Kambu. He was carrying an air gun. From my conversation with him, I knew that he was going to go hunting in the forest. He said that to reach the hunting ground, he needed to walk for around 4 hours. As a tourist guide, I wanted to explore the rainforest which had been the hunting ground of Elia. So, I told him that I was interested in making a survey trip to "his jungle." One or two days after our conversation, I met him again in his house in Inggramui village. After some discussions with him, we decided to go hiking several days later. On 4 August 2011 I, Elia and Yunus went to the forest. My goal was to make an assessment whether the rainforest could become a new tourist destination in Manokwari. 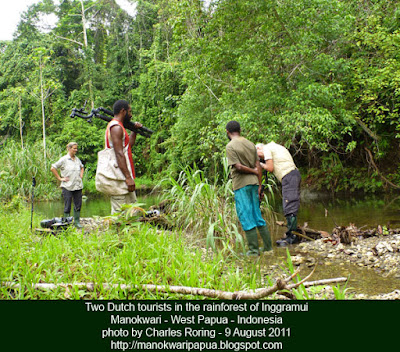 After making one day survey trip, I decided to open a new ecotourism post in the rainforest of Inggramui. With the help of Elia and his friends, we constructed a new hut for tourists. This hut would be used by tourists who are interested in the wildlife of New Guinea. On 9 August 2011 I brought two Dutch tourists (Herman Van Der Hart and Elizabeth Pot) to this new ecotourism post. Elia, Melianus and Abner did their best to serve the tourists. The weather was not so friendly to us. We experienced a lot of rain during our 3 days hiking trips in the tropical rainforest of Inggramui. 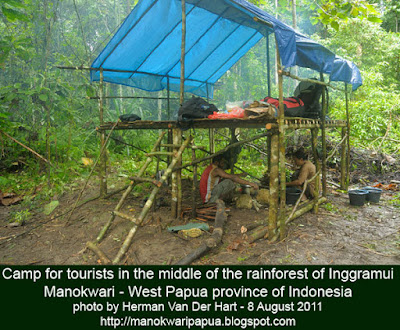 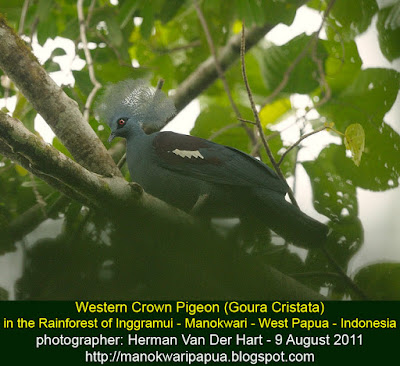 Herman is a professional photographer. While hiking in the forest, he was able to shoot Western Crown Pigeon. Even though the bird is protected by Indonesian law, local people continue to hunt it and other big birds such as the horn bill for their meat. The western crown pigeon, together with the lesser bird of paradise, is facing extinction right now. Through this ecotourism project, I hope that I can convert Elia Kambu and his friends from being hunters to become tourist guides. Converting them to become nature lovers is not an easy task because the number of tourists is still low. I still need money to build a small tourist house inside the jungle.  by Charles Roring
Also read:
Birds in Raja Ampat
Birdwatching and Snorkeling in Raja Ampat and Sorong
Watching Birds in Waigeo island of Raja Ampat
at September 14, 2011