I had an opportunity of visiting north-east region of Waigeo island two weeks ago. I went there with 2 Dutch volunteers, Wally and Coby from The Protestant Church of The Netherlands who went to the village to help local villagers build clean water facility for their turtle conservation initiative. When we arrived at the village, we were welcomed by children and youth who performed traditional dance.

I spent around five days exploring the coastal forest in the east of Yenbekaki village, the hill forest in Mount Sarembon and the lowland rainforest at Warebar beach and its main river.
The north-east coast of Raja Ampat has been famous as the place for watching turtles. There is a turtle conservation project that is run by local people. Because most of the land is still covered by densed tropical rainforest, this region is also good for birdwatching.
This north-east region of Waigeo island was rich in bird life. While walking along the beach, I was able to see seabirds such as Wimbrel, Radjah Shelduck, Beach Kingfisher, Plover, Singing Starling, Eastern Yellow Wagtail, Beach Thick Knee (Beach Stone-curlew). There were also Olive-backed Sunbird eating nectar among coconut flowers, and Sacred Kingfisher that was sitting on the branch of a tree near the turtle monitoring post.
I brought with me a Canon 200D with Tamron 150-600 mm G2. With this camera and telephoto lens, I was able to take pictures of birds.

Palm Cockatoo was the first bird that I shot from the area. It was sitting on top branch of a ficus tree with the blue sky as its background. Standing on the white sand beach of Yenbekaki, I aimed my camera and shot the bird several times. When I was about to sleep, on the second night of my stay in the village, a villager informed me that a sea-turtle had just landed on the beach. I immediately got up from my bed, took my camera and ran to the beach. It was on the north-western side of the village. When I arrived the mother turtle was still laying eggs. I made some photos of her. Because I brought a camera with telephoto lens, I had to step back a few meters away from her in order to put her into the frame of my camera. It was a nice experience. The turtle was an Olive-ridley one. She was laying eggs just behind the kitchen of a family's house in the village. I went to northern-east region of Waigeo to watch birds. Seeing a sea turtle laying eggs is a very big bonus. What a lucky night!
In north-east coast of Yenbekaki village, I saw Willie Wagtail, Torresian Crow, Eclectus Parrot and Lesser-crested Tern. There were also Striated Heron, Eastern Reef Egret and Brahminy Kite flying around. Near the mangrove trees, I heard the sounds of several Beach Kingfishers. I stopped and tried to find where they were. Fortunately, one of the birds was flying low and landed on a branch of a tree in front of me. I carefully aimed my camera again and shot the beautiful bird several times.
Some villagers accompanied me to explore the rainforest behind the village in Mount Sarembon. There, we saw Hooded Butcherbird, Papuan Black Myzomela, Oriental Dollarbird, Rufous-bellied Kookaburra, Blyth's Hornbill, Eclectus Parrot, Brown-headed Crow, Brown Cuckoo Dove, Yellow-faced Myna, and Sulphur-crested Cockatoo.
Villagers brought me to Warebar river and told me that the rainforest along this river was the natural habitat of Bruijn's Brushturkey or Waigeo Brushturkey. I also heard the call of Red Bird of Paradise. I had seen it and the Wilson's Bird of Paradise in southern region of Waigeo. So, they were not in the target list of birds to see this time. At the rivermouth, I saw Black capped lory, Bridled Tern, and Sacred Kingfisher. An Eastern Yellow Wagtail was walking among wood debris that had just landed from the sea. I also made several photos of this bird.
Coming out of the Warebar river, we continued our exploration by walking along the beach. Striated Heron was flying low away from us. The sand of the beach of fine black and very beautiful.
It was the place where sea turtles land to lay eggs. Some of them include Leatherback, Olive-ridley, Hawksbill and Green Turtles. At the western end of the beach, I saw some big rocks. There were some plants on them. Upon closer inspection on one of them, I found out that it was covered by orchid plants. I looked like Giant Orchid. I could call it Waigeo's Queen of the Orchids. 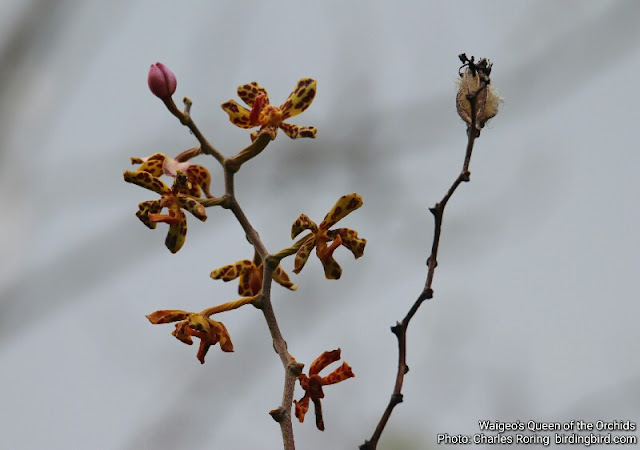 Traveling to north-east region of Waigeo island was a fun and nice experience.
When I was in the boat heading back to Waisai, I saw a big group of Lesser Frigatebirds flying in the sky. In a distant an Eastern Osprey was flying over the sea. I hope that I would be able to visit the region again in the near future.
If you are interested in visiting and exploring the avifauna life of Raja Ampat and want me to be your guide, please, contact me (Charles Roring) by email to: peace4wp@gmail.com or by whatsapp to: +6281332245180.
at October 17, 2019