From the sea of Raja Ampat to the jungle of Sorong
From 2 to 4 October 2016 I guided two British tourists in the jungle of Sorong regency. They were Brian and Claire. Previously, they spent several days snorkeling and birding in Raja Ampat. After that they crossed the sea between Waisai harbor and Sorong town by fast passenger ferry Marina Express. I met them in the afternoon at Pelabuhan Rakyat and transferred them to the rainforest of Klasow valley. We went there by a 4WD car and arrived at the edge of the forest at 19.00 local time. It was dark and raining when we began walking into the jungle to reach a village that was located near Klabolo stream. I carried two bags loaded with food, clothes, and birding devices, other local guides also helped me. Together with the British tourists, we walked along muddy path to the village. It took around one and a half hour to reach it.
Watching Paradise Birds 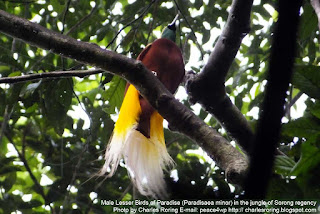 We had simple food that night. Our meals were rice, noodle and sardine. Because we were so tired, we slept early. The next morning, we woke up early at around 04.30. It was still dark when we left the village. We were guided by two young men from the village. They were Daniel and Yulianus. We turned on our torches and began walking up steep slopes in the south of the village. We reached the display trees of the paradise birds at around 06.15. When we stopped under one of the trees, we saw two males of Lesser Birds of Paradise and several female birds. Brian and Claire took their binoculars and watched the birds. They also took their digital camera and video recording device. I saw Brian recorded the sounds of the birds using a special recording device with a microphone that looks like a long stick. 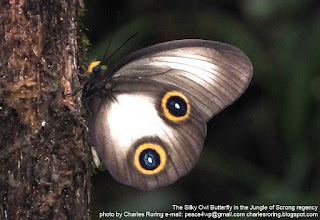 Because I had seen the birds during my previous trips, I decided to sit on the ground. It was good to keep the birds in the trees. The male birds of paradise were dancing from one branch to another and showing their beautiful feather in order to attract their female counterparts. It was a competition among the male birds. Sometimes they were fighting.
Birding Walk
After watching the morning performance of the paradise birds, we walked back to the village. We still did the birdwatching along the way. We saw brown cuckooshrike, rainbow lorikeet, palm cockatoo, spangled drongo, pinon imperial pigeon, and a lot of other birds both at the bank of the Klasow river and under the canopy of the forest. Claire said that she saw a King Bird of Paradise. She also said she saw a female Magnificent Riflebird flying across the river. Our local guide Yulianus confirmed that he saw King Bird of Paradise (Cicinnurus regius) dancing on the branch of a tall tree. At the hill near the village, we saw a wompoo fruit dove, and beautiful fruit dove. 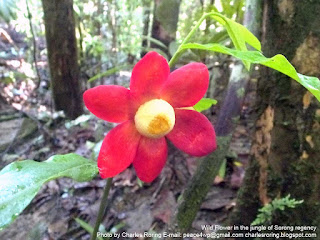 In addition to birds, we also saw colorful butterflies such as Ornitopthera priamus and Taenaris catops in the jungle. After having brunch, they weather suddenly changed and rained for around 1 hour. But we saw glossy swift, moustached treeswift and a forest kingfisher in the clearing area of the village. Brian told me that the forest kingfisher was a migrant bird coming from Australia and is usually found in southern New Guinea. It's good to see it here in the northwest region of the island.
The Biggest and the Smallest Birds of the Day
In the afternoon in the final day of our birding trip in Sorong, we saw cassowary, yellow billed kingfisher, black lory, eclectus parrot. While we were sitting on a log at the bank of a river in the north of the village, we successfully spotted a Papuan Dwarf Kingfisher. It was amazing to see the biggest (Cassowary) and the smallest bird (Papuan Dwarf Kingfisher on the same day.
I could not take pictures of all the birds because my camera was not equipped with super telephoto lens. So, I was satisfied enough with some pictures of wildflower, butterfly, and paradise bird. As of today, I still cannot identify the species name of the red flower that is shown above.
Want me to be your private guide?
As a tour guide, I offer birding, snorkeling, camping and sightseeing tours for visitors who want to visit West Papua region especially in areas like Raja Ampat, Sorong and Manokwari, Triton bay, and Numfor island. If you are interested, please, contact me by email to: peace4wp@gmail.com or by cell phone/ whatsapp +6281332245180.
at October 08, 2016