Trekking and Camping at the Banks of Syuan River 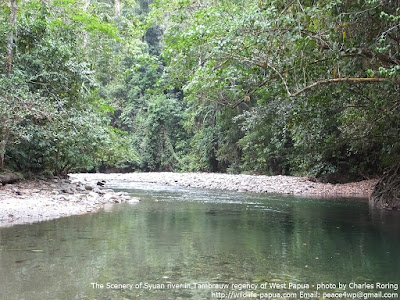 I have just returned from organizing a 4-day/ 3-night trekking and camping tour along the sides of Syuan river. I, together with local people, guided three American and one Hongkong visitors. We went to Tambrauw regency in the northern coast of West Papua. There, we explored the tropical rainforest along both sides of Syuan river.
We walked on the trails that the indigenous people used for hunting wild animals. As we walked through the jungle, we saw big trees, butterflies and birds that were flying in the sky. We had to cross the river several times to make shortcuts.
Syuan had a lot of spots that were good for swimming. The water was crystal clear and cool. The atmosphere was filled with fresh air. While walking or sitting at the side of the river, We could hear the sounds of birds, and insects that were mixed with the sounds of flowing water. They were a nice natural music that could refresh our mind.
There were some birds that I could easily identify. Among them were blyth's hornbill, sulphur crested cockatoo, and egret. There was one species whose bill was a little bit different from the illustration that I saw on Birds of New Guinea. Its name was Grey Crow (Corvus tristis). It had pinkish face but its real bill was slender. I saw the bird flying in a group of six or eight birds when I was swimming in Syuan river. For the order of Lepidoptera, there were birdwing butterfly that I saw such as the Ornithoptera priamus. 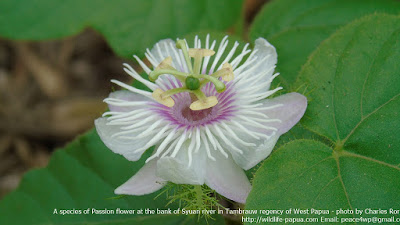 We walked slowly along the path to enjoy the beauty of nature. We stopped several times to listen to the explanation of local villagers who accompanied us about the health benefits of certain herbs. The scenery of the forest in Tambrauw mountains, ravine and bends of the Syuan river was very beautiful.
Book your rainforest tour to Tambrauw mountains now by contacting my email (Charles Roring): peace4wp@gmail.com
at October 24, 2015