The beetles that I am going to discuss here are not the types of cars that are manufactured by volkswagen but the insects that we can see in New Guinea - the second largest island in the world after Greenland. Because of its location in tropical region, New Guinea is rich in natural biodiversity Tropical Rainforest of Numfor island is rich of insects including beetles. Beetles that are common include the ones, I guess, from tricondyla aptera species. Another species of beetle that is very famous in the world is the eupholus magnificus. I personally am not an expert in the study of rainforest insects but when I see the eupholus beetle or weevil, I am amazed by the beautiful colors that it has. The insect looks like a mechanical, or robotic  plastic toy. When we look closer to the insect, we will realize that it is really an insect from the rainforest of West Papua. To see or watch it, we need to come early in the morning or before the sunset. It usually comes out from its hiding place and takes a rest on the leaves of bush plants. 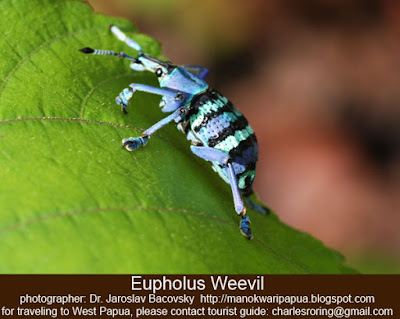 Yesterday, I watched a program on DWTV - a German state television that is broadcasted throughout the world using satellites about a research in the country on the development of powerful tape that applies the principles of how a reptile called gecko sticks its feet on smooth surface such as glass window.
Another research on insects can also bring new inventions in the human world that will improve our living condition at least we can understand the roles of insects in equilibrium of rainforest ecosystem and world environment as a whole.

If you are interested in visiting Arfak mountains or Numfor island for studying tropical insects of West Papua, and if you need an interpreter or guide to help you arrange your trip and communicate with local people, please, contact me via my email: charlesroring@gmail.com.
Also read: Watching beetles in tropical rainforest
at April 07, 2011