Mountain Biking in the Morning

Once upon a time in January 2011, I rode my mountain bike in the morning. It was not my usual time for mountain biking but I felt that I should try some exercises in the morning to keep my body in fit condition. Manokwari city dwellers were still sleeping when I pushed by Cozmic DX 2.0 out of my house. I got on to the bike and started riding it to the east of the city. The cool air hit my face and my hands. I pressed on faster and faster. As usual, my destination was Pasir Putih beach. I wanted to reach the area before sunrise. 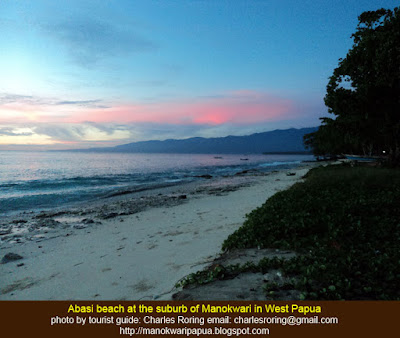 It took around 25 minutes for me to reach the beach. I stopped there for a while admiring the beautiful view of the Manokwari bay and the blue sea that was very calm that morning. When I arrived at the Pasir Putih beach, the sun had not risen. After taking some deep breathes to restore my energy, I continued riding my bicycle again. This time my destination was Abasi beach. It took another fifteen minutes to reach the beach whose waves could reach up to three meters between November and February. At Abasi we could sometimes watch children wave surfing during the high waves season. I stopped my mountain bike near the white sandy beach of Abasi. 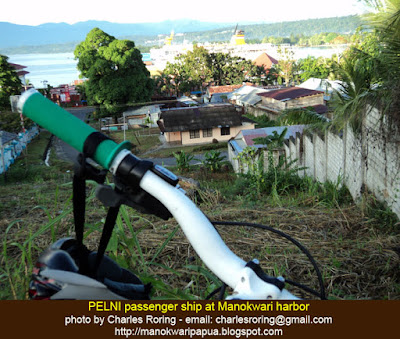 The rising sun creates a band of red sky at the south above the Arfak mountains. It was really beautiful to sit on my bicycle admiring the magnificent view of the blue Arfak mountains with the bright pink sky. I really enjoyed the morning cycling journey at that time but I knew that I had to return home immediately, otherwise the streets of Manokwari city would be filled with cars and motorcycles again. As I ascended a slope behind the governor's office of West Papua province, I stopped for a few minutes to take pictures of a Pelni passenger ship that was mooring at Manokwari harbor. While I am writing this article, I feel that I will do the morning mountain biking again when I have free time next week. by Charles Roring
Also read:
Mountain bike tour in Manokwari
Mountain bike tour to Cape Bakaro
at March 28, 2011