Last week I visited Kwau village in Mokwam region of Arfak range. I guided two birding visitors from the United States at that time. Our targets were Western Parotia, Magnificent Bird of Paradise, Black Sicklebill, and Superb Bird of Paradise. During our 5 days of tour in Arfak mountains, we were able to watch them. For us, watching the dance of Western Parotia was in our list of target. To watch the bird, we had to wake up early in the morning at 04.30 to make preparations such as wearing hiking boots or sport shoes, putting all our birdwatching equipment. After drinking tea/ coffee and eating some biscuits, we left our guesthouse in Mount Soyti. We used flashlight because it was still dark. First we walked along the unpaved road for five minutes and then did hiking up steep slopes for fifteen to twenty minutes. When we arrived at the birding ground, we still had to enter a birding hut that had been constructed from corrugated metal roofs for birdwatchers by villagers. To increase our chance of watching the bird, villager put red pandanus fruit on a wooden frame around 5 feet above the ground.
In less than 2 minutes after sitting inside the observation hut, we saw a bird landed on the red fruit. It was a female Superb Bird of Paradise. She began to eat the grains of the red fruit as we turned on our digital cameras and aimed them at the bird. Sunglight had appeared in the sky but had not fully reach the forest floor. In such low light condition, I carefully adjusted my camera and pressed its shutter button several times to shoot the bird. Later, more birds came. They were female Western Parotias. They also ate the fruits. 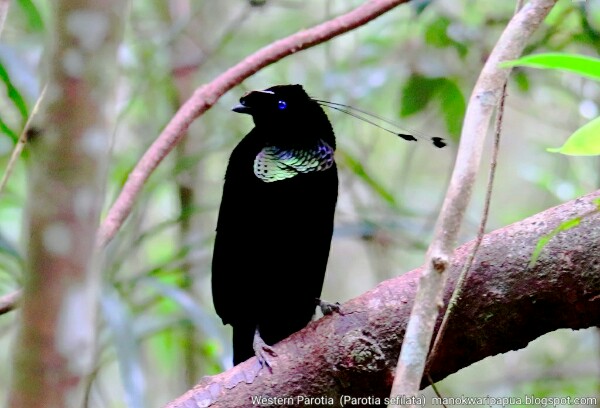 A dark bird showed up in higher branch of a tree in front of us and started to make calls. It was a male Western Parotia.
Most of his body, tail, and head were covered by black feather. His breast was covered by metalic breast shield. Forehead was triangular white. He had crystal blue eyes and six wire head antennas. Three on each side. He was a beautiful paradise bird.
He hopped to lower branches and hanging vines and then to the ground. He picked up fallen leaves and twigs. While clearing his dancing stage, he did some rehearsals. Suddenly he flew towards the red fruit. The female parotias jumped to nearby by branches. The male parotia ate some grains of the fruits and then returned to his dancing ground again. He picked up some more dry leaves and started to perform his ballet dance. When doing his performance, he expanded his feather to look like skirt. He walked, shaked his head, and did a little jump. In the avian world he is considered as the best ballet dancer.
I made tens of photographs of the paradise bird when he was in the tree, or on the dancing ground. I was amazed by the beautiful dance performance of the male Western Parotia. However, the female Western Parotias that were watching him from higher branches were not so impressed with the performance. They returned to the red fruit, ate its grain and then flew away leaving the male Western Parotia in despair. He called them to come back but they did not. He flew to the fruit, had his breakfast and then disappeared into the thick forest of Arfak mountains. There were still other birds that landed on the same fruit such as the female Black Sicklebill (mother and daughter). Later the female Western Parotias returned to the red fruit, they were chased by a young male Western Parotia and by an adult one.
Our watch indicated that it was 09.10. We decided to wait a little longer with hope that we could watch another dancing show. The male Western Parotia landed on his dancing ground again but he only did some clearing works. We were satisfied with the performance and were happy to leave the birding hut that morning. It had been a fantastic show. - written by Charles Roring
at July 20, 2019