One Night in Arfak mountains

After trekking for 10 hours in the lowland forest along Pami river, the next morning I and the 3 French tourists continued their trip to upper montane forest of Arfak mountains. They were Paul, Sophie and Stephanie. We left Manokwari early in the morning hoping to reach the forest of Kwau village at around 6 a.m. so that we would be able to watch vogelkop bowerbird seducing his female birds. The 4WD pick-up truck that was carrying us was driven by Goris. He drove the Toyota Hilux too fast. Unfortunately, the driver made a mistake. By accident he drove the truck into a ditch that was covered by thick grass. We had to put granite stones into the ditch to help the driver pulled the car out of it. The car could not arrive on time. 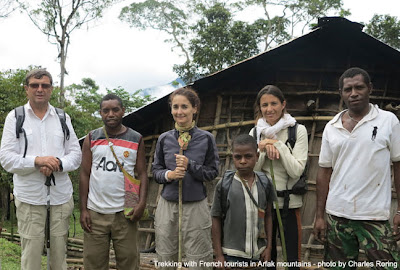 Fortunately, when these French guests went to watch the vogelkop bowerbird (Amblyornis innornatus), they were able to see it. In the afternoon, they were able to watch Western Parotia (Parotia sefilata) whose male bird dances like a ballerina. They were lucky because not all of the guests who visited Arfak range saw the bird. Well, because the one that dances is a male bird, the right term might be dancer or danseur. What is a male ballet dancer called? balletmen or ballerino :-)
At night, the temperature dropped. I saw the French women put on thick clothing. It is funny to see European wear several layers of clothing. Perhaps, they are not use to cold temperature anymore because they have been living in Bali for more than five years. They are scuba divers who are attracted to the beauty of coral reef of Indonesia. All of us went to bed at around 8 a.m. in order to wake up early in the morning to watch the Magnificent birds of paradise.
They did a very long walking tour in the jungle. They fell to the ground, experienced bruises on their feet and become exhausted at the end of the trip. But they said that they really liked the rainforest tour. I am really grateful for their support in my eco-tourism program that is aimed at preserving rainforest and empowering the indigenous people of Papua. by Charles Roring/ E-mail: peace4wp@gmail.com
at July 10, 2013